That Ultra Special Combo of Smoking and Gaming

Video games and smoking have a special relationship. Many times gamers and herb connoisseurs are one and the same, as there's nothing quite like coming home from a long day, toking up, and sitting down to your favorite game. And sure, while the likes of Call of Duty, Fortnite, Minecraft, and any other blockbuster gaming title are all made better with a blunt or two, there's just something about the stories, look, and feel of a few certain games that lend themselves to an all out elevated experience. Below, we'll take a look at ten of the best, most beautifully trippy video games to enhance your high tonight!

1. Lovers In a Dangerous Space Time

Lovers in a Dangerous Space Time is a side scrolling adventure, a trippy colorful Saturday morning cartoon, and a cutesy multi-player RPG all thrown in to one. In other words, the perfect game to load up after you and your crew have just burned down. In Lovers you and up to four of your circle become the literally crew of a spaceship outfitted with five separate stations; the shields, map, weapons, engine, and Yamato cannon. Each player controls a station on the ship and must move from station to station to pilot the ship, activate the shields, or fire upon enemies. Levels are completed by rescuing five frogs, bunnies, foxes, or ducks after which a heart shaped portal appears to usher you on to the next. With its colorful anime aesthetic, funk soundtrack, and simple but addicting gameplay, Lovers in a Dangerous Space Time is the perfect party pass time game after everyone gets in the right head space.

The Portal series, consisting of Portal 1 and 2, is a heady sci-fi puzzle adventure made up of equal parts perception altering gameplay, dry witty comedy, and intense run-for-your-life action, making it perfect for a night alone in a dark room thick with smoke clouds. In Portal you play as Chell, a test subject for the new Aperture Science Handheld Portal Device from Aperture Laboratories Computer-Aided Enrichment Center. The 'portal gun' allows you to open blue entrance portals and orange exit portals to get around objects and puzzles and through the dangerous maze like levels controlled by the malicious artificial intelligence system GLaDOS. Escape from Aperture Labs is the ultimate goal but along the way you'll encounter traps set to keep you from your breakout, strange scribbles on the wall from what seems like a past test subject, and a weighted metal cube that will become your closest companion. Portal is the ultimate trippy beautiful video game for an evening spent in an indica haze!

Limbo is a bit of a step away from bright and colorful worlds the likes of Lovers in a Dangerous Space Time and Portal, as this game is rendered completely in black and white, but nonetheless provides a trippy otherworldly side scrolling adventure perfectly suited for a Friday night play through accompanied by a danker strain. In Limbo you play an unnamed boy who mysteriously awakens in a forest on the edge of hell. Making your way through an environment littered with traps, creatures, and startling narrative turns, you attempt to find your sister in the hushed darkness. Limbo is Mario meets Dante's Inferno and offers hours of beautifully dark game play perfect for a good couch-lock smoke and some philosophical meanderings on the human soul. 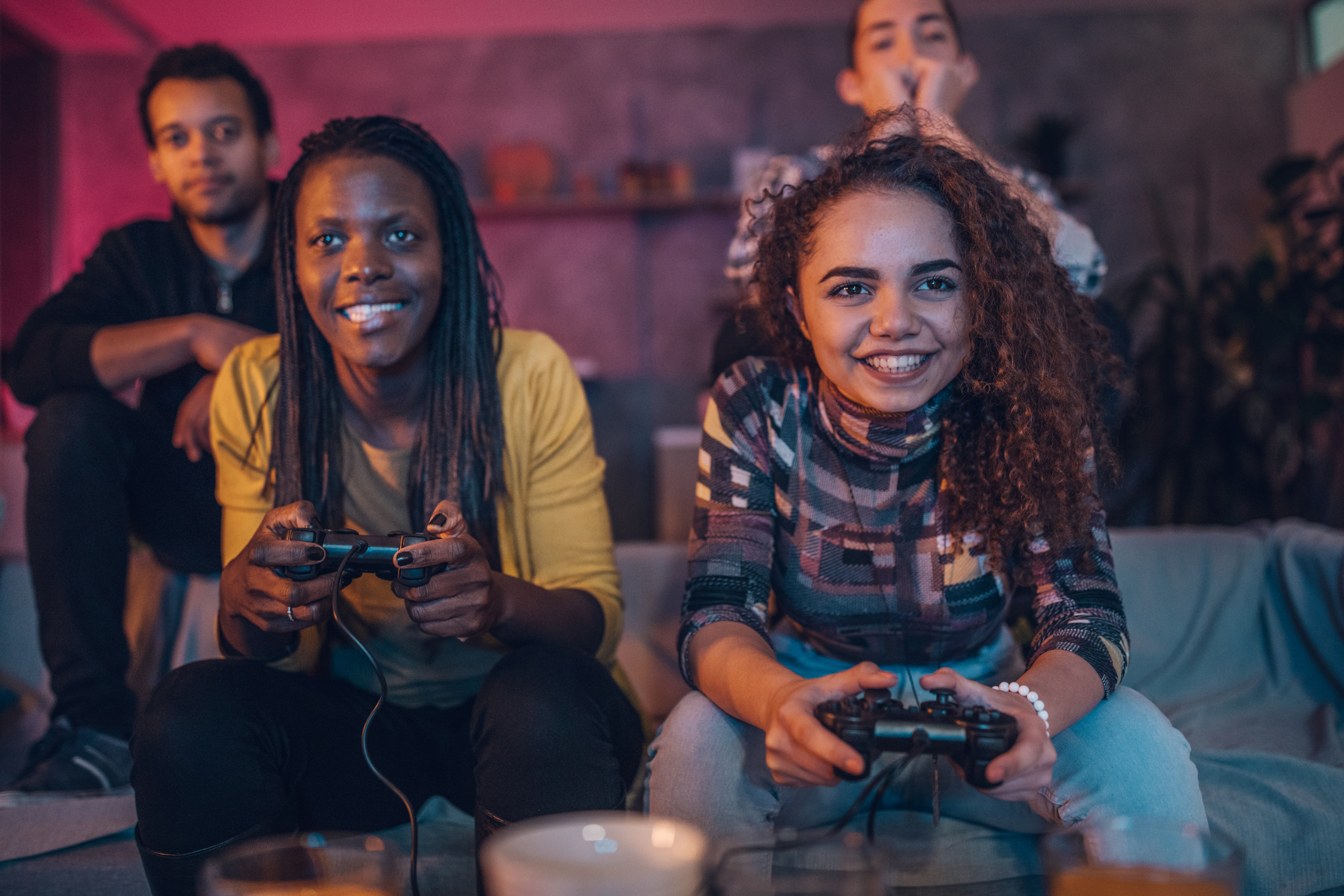 What smoke circle hasn't passed one around and discussed consciousness, existence, and the philosophies thereof? In Everything, you take control of numerous levels of 'existence'. The game begins by offering you control of a variety of creatures roaming the landscape including deer, pigs, and trees. From there you begin to shift into smaller and smaller aspects of matter until reaching the subatomic level at which point you unlock the ability to shift into larger aspects of the universe like continents, planets, and star systems. The goal of the game is to catalog every object to which your consciousness can be shifted into the in-game encyclopedia. With its simple but captivating graphics, Narration and commentary by philosopher Allan Watts, and questions of cosmic consciousness raised by the intriguing gameplay, Everything is an cerebral gaming experience that pairs well with a trippy headspace.

No Man's Sky is an action adventure exploration game that allows the player to explore, record, and survive on over a quintillion planets in the procedurally generated open world universe. Yes, you read that right, quintillion, meaning with a bag big enough you could smoke down and play this game forever without ever actually seeing it all. Theoretically the point of the game is to reach the center of the universe which could take up to forty hours if you don't stop for side missions. However, designers have commented that No Man's Sky was created to be played in any manner that suits the player including cataloging plants and animals, establishing planetary trade routes, or just chilling on back galaxy worlds with your homies. No Man's Sky is an excellent play for any sci-fi obsessed gamer and after a few tokes the surreal, oddly colored worlds take on a beauty unlike any other title before it.

Another excellent title for those partaking gamers that may prefer the dark and dingy to the colorful worlds of many of the titles on this list, Kentucky Route Zero is a point and click adventure game full of surreal and brain bending moments that could peak the minds of any player especially with some high grade sativa. In Kentucky Route Zero you play as Conway, a trucker bound for an antique delivery along with his dog on the mysterious Route Zero. Throughout the game you encounter all sorts of strange Kentucky natives like the ghosts of dead miners, massive birds of prey, and a man obsessed with his black mold filled 'super computer.' If you're the type that blazes up and becomes captivated by reruns of The X-files or Twin Peaks, Kentucky Route Zero is the game for you!

Dubbed one of the most unnerving, unpredictable, and experimental titles in gaming history, LSD: Dream Emulator may be the closest we will ever come to dreaming in the waking world. Originally designed as a rejection of games by Japanese artist Osamu Sato, who sought to use the PlayStation to exhibit contemporary art, LSD has no real objective and instead, the player ventures through a variety of trippy and surreal environments. After each level or 'dream' is completed, the dream is ranked on a graph labeling the experience an upper, downer, static, or dynamic dream. Within the dreams there are sudden game overs, strange videos and texts, and a humanoid shape wondering the landscape. Though it may not exactly be your standard gaming affair, if any game suits itself to being a little lifted during play, it is without a doubt LSD: Dream Emulator.

Monument Valley and Monument Valley 2 are indie puzzle games in which the player guides character Ida, and in the sequel Ro and child, through a series of impossible objects and optical illusions called 'sacred geometry' in game. Through manipulating the world around your character you build bridges, move pillars and platforms, and access different areas through mind bending optical illusions that connect the world of Monument Valley together. The colorful and dreamlike atmosphere of the game provide a cool and soothing aesthetic on the elusive journey of forgiveness through which you guide Ida, or the confusing maze of emotions that is life as Ro and her child. This portable game is an excellent option to burn down and chill to at the end of the day if you're looking for something to go along with a soothing indica, that isn't too immersive, but offers an abundance of playability.

9. The Binding of Issac

The Binding of Issac is a darkly trippy top down dungeon crawler that may not be for everyone. For those who are down to smoke a bowl and get into some exciting procedurally generated adventures, packed with hilarious black comedy, however, this is your game! In The Binding of Issac, you play as Issac, who's mother believes she has received a message from God demanding proof of her faith by way of her son's life. In fear, Issac flees to the monster infested basement of his home where you'll face a collection of creatures as you move from room to room. Picking up items and powerups as you go along, you'll face down bosses ranging from massive poop piles to elder gods. The Binding of Issac is a unique game with massive replay value that will be a new favorite of any toker looking for something a little odd with a lot of action to play through after burning down.

Journey is a relaxing, meditative adventure through another world that is made all the better with some thick sativa smoke clouds wafting through the room. Controlling a robed wanderer, you journey through the desert in pursuit of a distant mountain. Journey allows players to interact with certain aspects of the environment to propel their traveler to different parts along their desert route. Through the ethereal soundtrack that swells and fades depending on the actions of the player, and the use of vibrant colors that appear when the player is nearing an area or object of use, and cooler hues when in nonactive areas, Journey manages to construct a deeply emotional experience without voice acting or dialogue. Ultimately, Journey may just be the greatest stoner game of all time due to its relaxing play through, use of color and sound to portray emotion, and simple game mechanics.

STONER BEWARE: Video game lock is a real and powerful condition! We've all been there, in a cloud of smoke working diligently to beat that final level only to look up and realize that work starts in an hour and sleep ain't happening. Plus, the pad smells like a distillery caught on fire. The good news is, BluntPower has you covered, at least on that last one. With over two hundred options, like Pineapple, Cool Water, and Summer Breeze, in both air freshening sprays or incense (available in long and mini), BluntPower can completely eradicate any strong odors and leave spaces fresh and clean.

Let's be real, we gamers can probably benefit from that in more ways than one.