Budsmokers 101: How to Puff-Puff Pass Without Coughing Your Hit

Budsmoking has always been a sign that you had finally found the really cool kids. The ones who were coasting through school but could still pull a joint out of their shoe/backpack/Altoids box during lunch if you found an out-of-the-way spot. And since time immemorial, or at least the last few decades, there have been young people (and older folks) learning to hit it for the very first time. There's no predicting when your first marijuana experience will be because everyone falls in with the "right" crowd at a different time in life. Except, of course, now it's legal. So you can have your first joint, keefy bowl, or big bad blunt any time after you're 21 and can drive to a dispensary.

So if you're cool but learning to smoke for the first time alone or with friends, this one is for you.

Coughing a Hit is Awesome, but Painful

Okay, so smoking marijuana is a lot like rapping. It's all about breath control. If you don't control your breath when you hit it, you cough. Coughing can be great. It's the strongest high you'll ever get and can send you straight to the moon on a tiny hit of weed. But it will also set your throat and lungs on fire and, cough hard enough, and you'll reveal your true budsmoker newbie status.

If you want to be super smooth when passing around the joint or taking your turn with the bong, you gotta know how not to cough. Because coughing can be awesome for your high but it's hell for your dignity. Plus, you gotta know how to do it right so you can do it wrong on purpose when it's time to blast your high into the stratosphere.

Here's how it goes:

Don't make your first hit a lung-filling mega-smoke. Of course you want to get super high and impress your friends by blowing major weed clouds. But if you're new to the game and don't know how to control the urge to cough yet (it's a muscle thing, you'll learn it) then don't overdo it your first few hits or rounds.

Instead, 'sip' the weed. Not only is this a more dignified way to hit it, you'll also get a chance to get your sea-legs under you, so to speak. The other half of the totally undignified cough-out is that if it's your first time in the stratosphere, you're going to be napping through the party pretty soon.

Next, don't be surprised when your throat obeys but your lungs totally freak out. Smoke is bigger than you think it is and you can fill your lung capacity mega fast if you're not careful. Think about how a smoke cloud expands in the air. It's doing that in your lungs, too, but it's concentrated in the joint before you hit it. That bug-eyed look of someone who's successfully holding? That's because their lungs have just become super inflated with hot, deliciously keefy weed smoke.

So be conscious of your lung capacity. Slowly increase the amount you breathe in with each hit and learn how your lungs feel. If you fill up too much and then the smoke expands, you're gonna cough. It's a guarantee, even if you totally aced the initial inhale.

Don't worry, eventually you'll be able to breathe in huge hits and breathe out even bigger clouds with the best of 'em, but this is a muscle skill. Like shooting a perfect net-swishing basket or doing a triple-flip dive off the high board, we can't tell you how to do it. Your body learns. And you'll learn too, with practice. So start with the hits you can handle and train your lungs not to spasm and you'll get there. Promise. 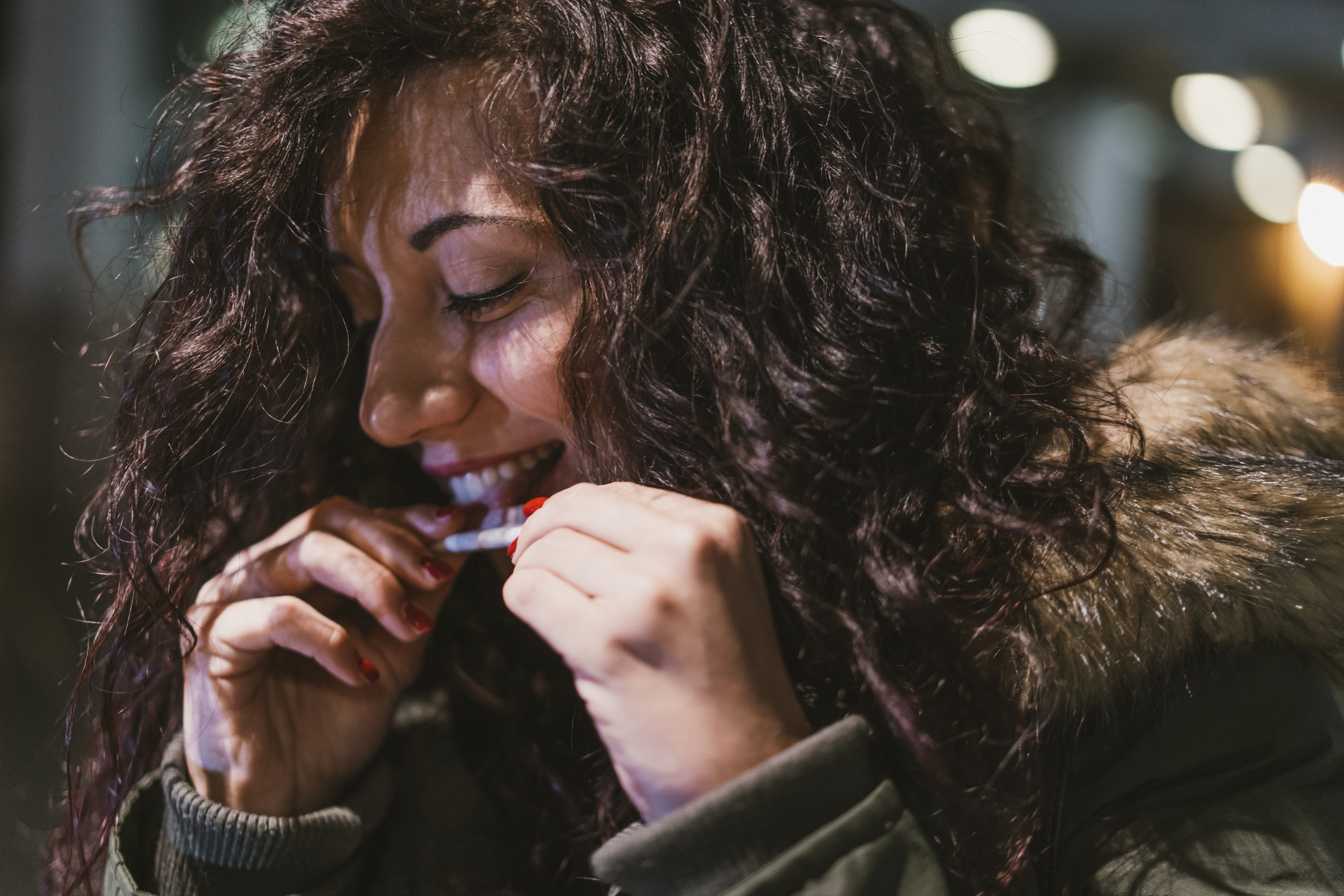 Take In Cool Air and Smoke At the Same Time

For your next trick, remember not to breathe in 100% weed smoke when you hit it. There's a trick to lipping joints and pipes that allows you to breathe in the weed and cool, clean air at the same time. It's like your fuel to oxygen mixture in the engine and doing it right can actually increase your high while reducing your chance to cough. If you know how. Here's what we've all learned from experience:

- Joints and Blunts: Pinch the End

If you're smoking a rolled joint or blunt, pinch the end. This is not just good joint-holding technique to keep the weed in, it also helps you control how much of the joint is in your mouth and how much air you're taking in out the sides. It will make an almost-whistling sound when you're doing it right. Then use your lip-control to decide how much suction to put on the joint and how much air to take in.

- Bowls and Bongs: Lip the Mouthpiece

For pipe bowls and bongs, lip action is also key but without the pinch maneuver. Instead, lip the mouthpiece so that you are mostly breathing in weed but can also take in a little cool air at the same time. And if you feel your eyes bugging out and your face about to explode, increase the air in your mixture and then hand off to the next stoner.

Finally, remember to leave a little lung-space to top-off your hit with cool air. This is kinda like running your taps for a few seconds before getting a drink of water. It clears your throat of hot weed smoke and channels all the weed directly into your lungs. The top-off decreases your chance of coughing and increases your ability to hold it for a really long time.

The Secret Behind "Puff-Puff Pass"

You've probably heard the phrase "Puff-Puff Pass" said a few hundred times in stoner culture and most people can guess what it means even if they don't smoke. In conversation, it translates to "Take a hit and pass it on" or "Hey buddy, don't bogart the joint" But it also holds a secret tip for newbie budsmokers to learn how to hit it right.

Why are there two puffs, many young teens wonder before they're old enough to hold their first joint. The answer is actually the air-trick we just talked bout. The double-puff is your chance to pinch the end and hit, judge how well you hit it, and take a second hit with a better weed-to-air ratio before passing it on. It's a secret blunt-smoking formula for getting a satisfying hit before you pass to the next stoner in the circle so no one takes too much or too little.

The Puff-Puff Pass mattered a helluva lot more back when the one joint might be all your buddies had to share. But it's still excellent advice when you're learning how to stone with friends so everyone gets a really satisfying high without coughing their hit.

Of course, not everyone is down with the legal weed yet. Whether you're hiding your new habit from your mom who still thinks of you as her baby or you and your coworkers are covertly enjoying a joint out the back door of the stock room, the Puff-Puff Pass tradition is still going strong. And so is the tradition of quickly hiding your awesome high when the buzz-killers are near. With a quick spray of Blunt Power air freshener, your puff-puffing will be completely hidden; replaced by a smell that could be anything. Lemony cleaning solution, baby powder, your shampoo. Blunt Power is formulated to keep your secret when it needs to be a secret by completely covering the smell of that sparkly keefy goodness.